Egypt is a cash based society. Credit cards are for foreign tourists and the privileged few. Take three steps off the tourist circuit in any direction and you’ll find yourself in a completely different culture. If you get lost, hurt, or hungry, you better be carrying cash. The vast majority of Egyptians have never seen a credit card in their life, and probably half the population will live all their life without ever entering a bank. Cash is King in Egypt.

.
.
.
Islam forbids charging or paying interest on loans, so banking is not the convenient, lucrative business in Egypt as in the West. Egyptians are careful savers, with little need of banks. They are accustomed to doing everything by cash, even things that we in the West would consider impossible. The Western income is among the highest in the world, but almost nobody pays cash for a new car. In Egypt, if you don’t have cash to pay for a car, you’re probably still driving Grandpa’s donkey cart. In the West, most of us don’t have the savvy to build our own home, much less the ability to pay cash for it. But Egyptians are excellent builders, and buildings are constructed with cash, from the humblest animal barn in the village, to super-luxe high-rise apartment buildings in prime city center districts. Except for the deserts, the entire country appears perpetually under construction, so there’s obviously no shortage of cash in this economy, despite the lack of financing. The pyramids weren’t built with a loan, and today they are still building the same way, thanks to the flow of cold, hard cash.

Bringing our western ways with us back to Egypt, we thought cash was inconvenient. To pay our DSL/internet bill online, my husband and I applied for and received our shiny new debit cards. It took a month of false starts and struggles, going back and forth to the National Bank. Finally, I logged on to our internet account and followed the instructions for online bill payment. The transaction was declined by my bank, according to the response on the screen. We tried using my husband’s card, thinking it was because the DSL bill isn’t in my name. This transaction was also declined by the bank. I logged onto my new account with National Bank, and quickly discovered there’s no actual online banking offered. Not even a way to check my balance! My husband went to the DSL company to pay our bill in person, and was told it was already paid online! Do you suppose it was my card or his that got charged? Who knows – maybe both! Although we only got credit for one month…  It means we must return to the bank to investigate this mystery.

Banks in Egypt look like an airport caught in a sudden tornado. Customers, mostly government pensioners, are packed in, wall to wall, displaying characteristic nonchalance of such mayhem. I get a migraine just thinking about it, but it swirls all around them like weathered refugees in a war zone. To get in and out within a day is a miracle. To actually get something accomplished during that visit is practically impossible. Two or three visits to even approach success is far more commonplace. Strolling in to check my balance and investigate a mysterious debit? Forget it. Seriously, it’s easier on the head to just forget the whole stupid debit card and bank idea, and when in Egypt, do as Egyptians: Carry cash. 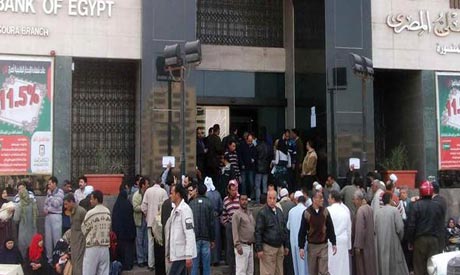 A typical queue outside of Egyptian banks - click for original