In Egypt, “Who you know,” not “what you know,” is paramount. People move the system, not technology. Social protocol and etiquette opens Egyptian doors, just by minding your manners, never forgetting yourself, and never crossing your boss. The “Good Old Boy Network” is a well-connected web, where successful social climbers are celebrated like heroes. If you forget this, you’ll soon be driving a tuk tuk, or it’s back to Grandpa’s village and the potato field for you!

.
.
.
In Islam, family members have first right to favors, so a good contact list is critical. Favors fuse families together, and huge networks grow exponentially. Once while entertaining, my husband mentioned I needed a document translated officially. His guest, a distant relative and retired Captain, called his cousin, the brother-in-law of General Mustafa. General Mustafa heads the Egyptian Translation Office. The brother-in-law told Captain Ahmed that we could visit the General’s office in Cairo on Tuesday, and have the translation written immediately.

Arriving in Cairo early Tuesday morning, we found the General’s office, but unfortunately, he wasn’t in. His Henchman, aka secretary, was currently the reigning Commander. Learning our appointment was requested by the General’s brother-in-law propelled him into action. Delighted to command on General Mustafa’s behalf, he proudly led us to the translator’s office. The translator wasn’t in, so we were left in the next office with commands for the translator upon his return. The office manager was quite pleased to have the General’s baton passed to him. Quickly commanding someone to serve tea, he began exchanging pleasantries with my Obviously Important Husband (and his Lovely American Wife), here under the personal care and command of General Mustafa.

Both opponents were nose to nose, but the translator’s hands were shaking. Abruptly, the Henchman turned and escorted us out to the front of the huge building, apologizing to Mohamed the entire distance! He assured us the translator would be dealt with appropriately…. God knows what “appropriately” means, but I think we witnessed the “kiss of death” when the Henchman greeted the translator! Before arriving home from Cairo that evening, Captain Ahmed called Mohamed, reassuring him that General Mustafa, personally, asked to see Mohamed back in his office the next day at 11 a.m. to correct “the situation.”

The last time anyone saw the translator, he was sitting in the front seat of a tuk tuk… 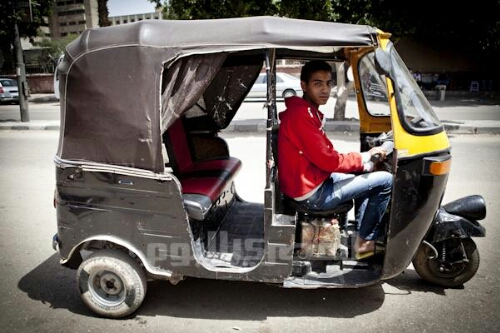