This is a picture of our pigeon barn: 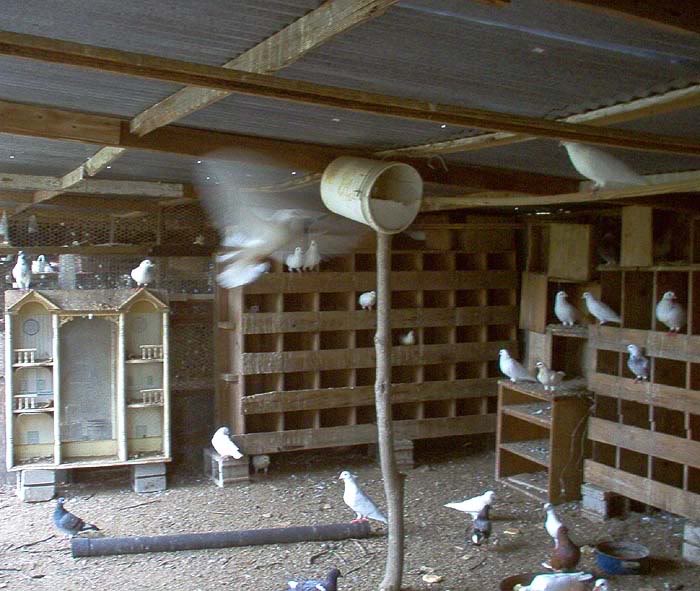 By the way, if a pigeon is old enough to fly, it is no longer considered squab. It’s just a pigeon!

From wikipedia: Main article: Squab (food)
http://en.wikipedia.org/wiki/Domestic_pigeon#For_food
“Pigeons are also bred for meat, generally called squab and harvested from young birds. Pigeons grow to a very large size in the nest before they are fledged and able to fly, and in this stage of their development (when they are called squabs) they are prized as food. For commercial meat production a breed of large white pigeon, named “King pigeon,” has been developed by selective breeding. Breeds of Pigeons developed for their meat are collectively known as Utility Pigeons.”

This is what they look like when they are still “Squab”:

With the recipe and photos intermingled:

I think you might not like the gory details of slitting his throat, so I’ll just say that you can chop off his head completely, but some folks like to eat the head, too, and it helps in the stuffing of the food cavity area above the breast if you have his head still attached to hold onto it as you stuff (covered below). So just cut the throat carefully to the spine but not all the way through the bones, and if you are muslim, don’t forget to say “Bismillah arRahman irRaheem!” as you do so. If you are not, this is a grateful invocation to our Merciful Creator in appreciation for this delicious food.

Next don’t forget to carefully remove the feed sack down his throat next to the windpipe. This is a rather delicate maneuver, just shove your finger down the slit from the knife in his neck between his skin next to the windpipe and peel away the feedbag from the skin.  Pull it out carefully, trying not to make any damage to his skin. This is a lot easier to say than do, and a lot easier to do before putting him in the hot water, but if you forget, it’s still possible to pull the feed bag out after the dunking.

.
.
.
Now drop him in a pot of boiling water, but only leave him there for about 30 seconds (not more) and pull him back out with a pair of tongs

Now it’s time to pull all the feathers off, which are pretty easy and basically just slip right off with a gentle finger rubbing. All except the wing feathers, they are more stubborn and you’ll have to pull them out one by one. 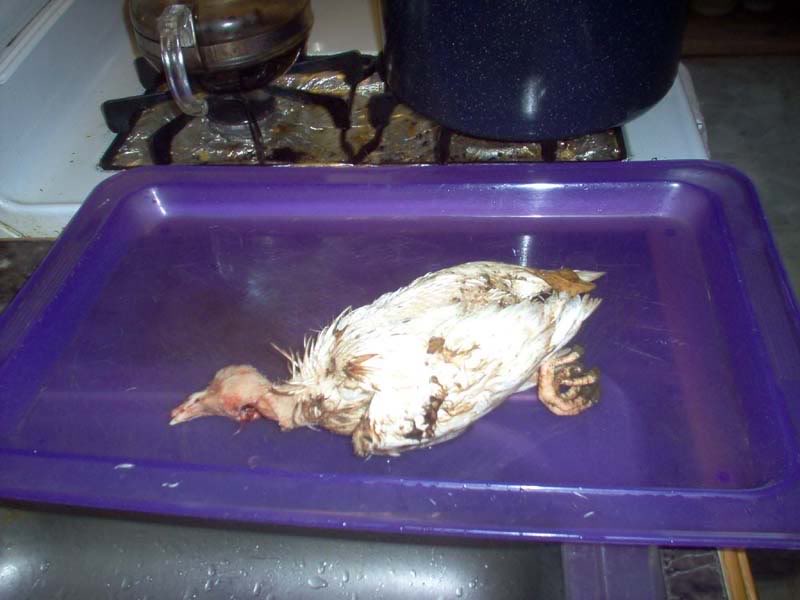 Next, carefully clean off any mud, rinse well, snip off his feet just below the knees, snip off his beak, pull out his tongue and anything else slippery in the mouth cavity, and then snip a little cut just under the rib cage and poke your fingers in up to the top of the chest cavity. If you have teenage children or siblings, these are critical survival skills they probably would like to learn!

Once inside, pull everything out that you can get your fingers on. Everything will pull out, but it will still be attached at the ‘bottom’. Rather than just pulling hard on the last end of the intestines over the fence, it’s recommended that you use a knife and cut as close to the anus as possible without damaging it. Wash this area very well, you won’t believe what you’re gonna do there shortly.

The good parts to save are the heart, the liver, and the gizzard. I don’t know what the pale colored meat is, but it’s good too. It’s found attached to the intestines. Perhaps somebody who knows more about pigeon anatomy can tell me what those are, usually there are two. Slice open the heart, and rinse out any blood trapped in there. Finally, don’t forget to cut open the gizzard and carefully remove the sand bag. It’s useful for the pigeon, but would definitely taste bad to us!

Be sure to look closely inside with good light and make sure you get the rest of the windpipe and all the lungs removed. They really stick to the ribs! Stick your finger back down the food cavity area between the skin and breast, too, and feel around to make sure it’s clean. Pretend you’re filling a water balloon and hold the neck up to the faucet and allow the water to go very gently into the food cavity area, draining through the chest cavity and out the opening in his stomach. Finally, wash the nice little birdie again in a bowl of soapy water, rinse well and set it in a bowl of fresh clean water while you do any other pigeons you might have butchered.

Next, you will need to place one generous handful of raw rice per pigeon in a frying pan. My hand is small so I always add one extra handful to the pan. Sprinkle with a little oil and salt and pepper, and add enough water to cover the rice. Heat this rice, stirring, until all the water is absorbed into the rice, then let the rice cool until you are able to handle it.

With the pigeon’s head cupped in your left palm, holding it gently by the neck with left thumb and middle finger, slip your left index finger down into his throat between the skin and the neck, holding open the way for your right hand to push rice down this hole. You are basically replacing his food bag storage area with half cooked rice. Keep stuffing until his chest sticks out and he can’t hide his pride. 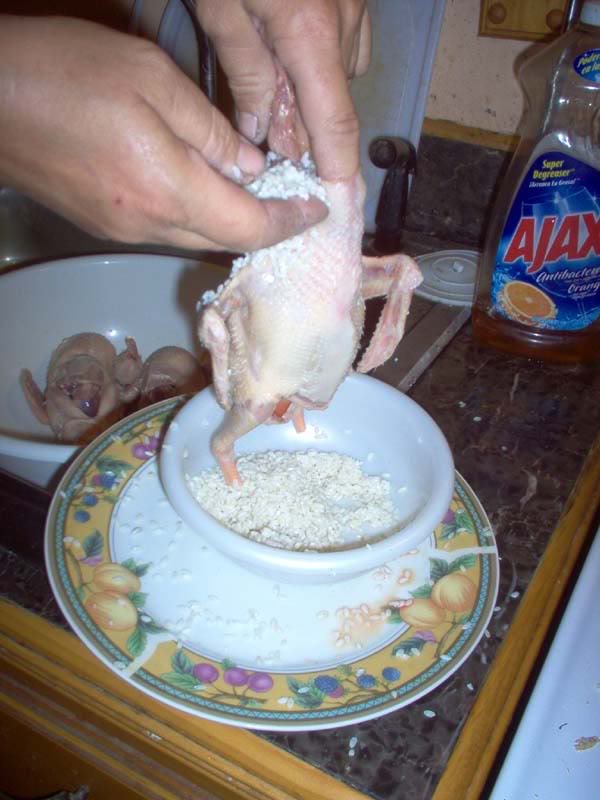 Tell him to “have a heart,” and close off this area by stuffing his heart back down his throat. Make him hold his head securely by tucking it under one wing. Then lay him down on a plate and fill up his chest/stomach cavity with rice, too. Leave enough room to close off this area by stuffing back in, on top of the rice, his liver and gizzard, as they make a great lid over the rice.

Now here’s the tough part. Ask him to bend his right leg so his knee bends up above the liver you just placed in there, and make the end of his leg stick back through the hole in his bottom. This is why you didn’t want to destroy it when you cut out the intestines clinging to it earlier.

Next ask him to shove his left leg under his right knee, crossing his legs nicely to close off the stomach cavity. Do the same to all the other pigeons you will cook. Don’t they look pretty????!!! 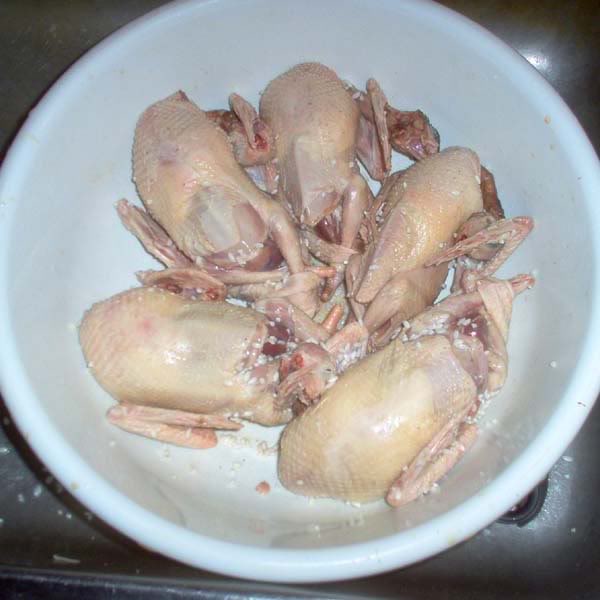 Set the stuffed squab carefully in a cooking pot and cover with warm water. Add salt to the water, as this will help the skin catch itself better and hopefully not rip if the water boils too strongly. Add an onion if you like, and/or some thin slices of ginger and a tbsp of lemon juice. Bring to a boil on medium heat and turn down to a simmering boil until done.

They are done when you can catch a wing, and your fingers press easily through the meat to the bone.

You might notice I wasn’t perfect at the job, so I wrapped some thread around one of them to hold it together better. A wire tie or two, recycled from bread bags, can be useful for this, too.

After the pigeons are done, gently remove them from the water with a big slotted spoon and place on the broiler pan under the heat in the oven and broil until their skins are beautiful brown and lightly crispy. This could also be done in a big wok with a bit of cooking oil instead of the broiler.

As you might guess, they don’t always come out perfect, so any rice that pops out of the birds into the soup makes a nice dish of pigeon rice soup on the side. Squirt a bit of lemon juice into the rice soup for an authentic mediterranean flavor. Bon Apetit, or, as we say in arabic, “bil hannah wa shiffah!” (With enjoyment and health!)